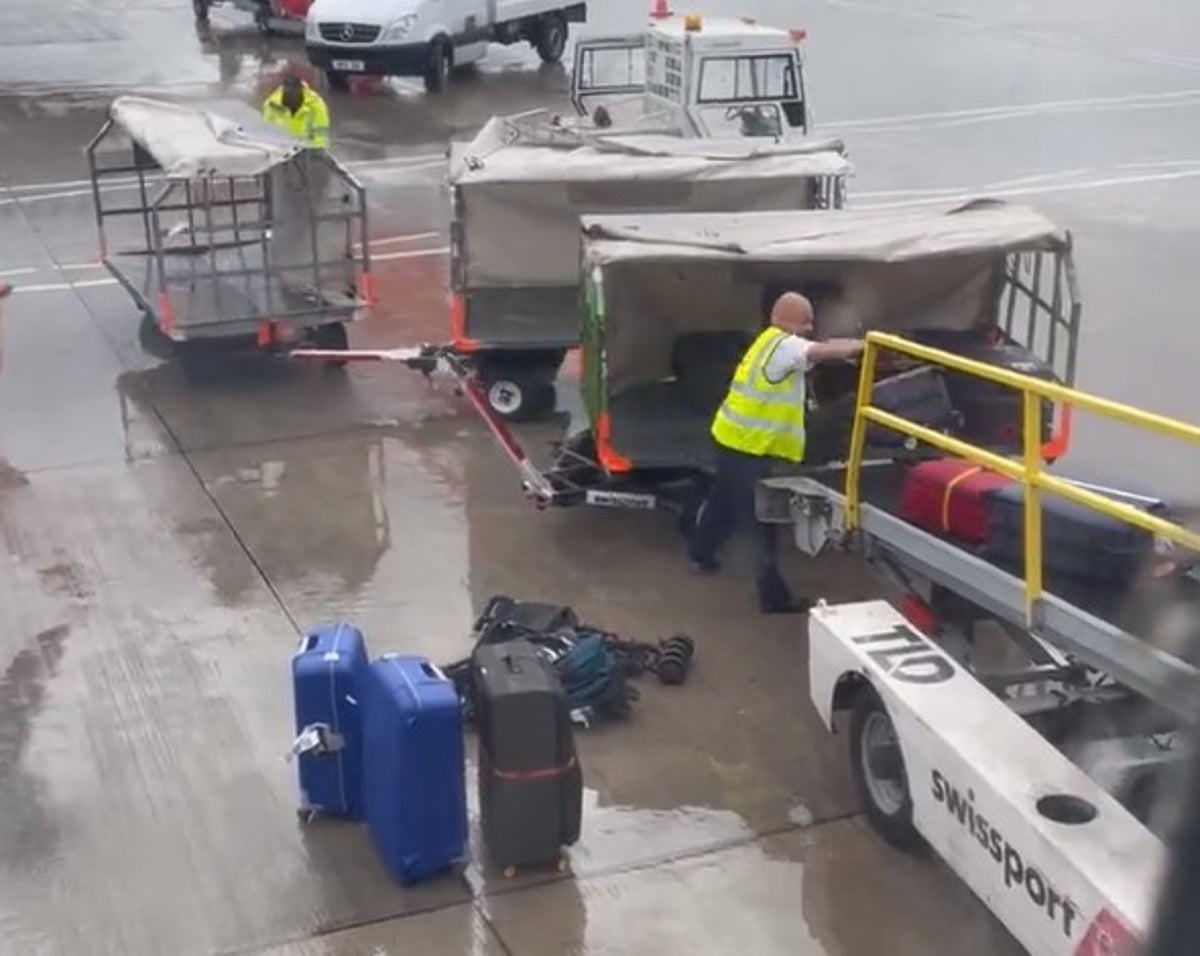 A Tui pilot known only as “Simon” has been praised by customers who say he left the cockpit to go and load bags onto the plane at Manchester Airport yesterday.

Passengers on Tui’s flight TOM2744 to Heraklion say the employee went “above and beyond” by going out into the rain to load cases himself, following a day-long delay to their flight.

Traveller Katherine Cox posted a video of a man in a tie and a high-vis, Tui-branded vest on the tarmac, loading cases onto the conveyor belt to the hold.

Meanwhile fellow customer Jenny Cook tweeted: “Please @TUIUK @TUIGroup can we get Simon the co pilot of the TOM2744 flying from Manchester on 30 May an excellence award?

“He is out on the tarmac in the rain helping to load the bags to try and get us on our way after 30 hours delay so far.”

In the video, passengers can be heard saying, “Go on lad,” and “Go on Simon,” with on saying, “This guy’s a legend,” as they criticise baggage handlers standing around on the tarmac.

The plane’s passengers had initially arrived for their flight a day and a half earlier – it had been scheduled for 7.55am on Sunday morning. They say they boarded a Tui plane around 7.30am with no problems.

However, they then endured a two-hour wait, which turned into a more than 24-hour delay.

Jenny Cook was travelling with her husband Duncan and twins Charlotte and Holly.

She told The Independent: “After waiting around two hours, the pilot advised us that the baggage was the problem. The passengers cheered when the bags arrived after about three hours and began to be loaded.

“But mid-load they were told to unload and the pilot confirmed that we were unable to stay on the plane. No reason was given. My girls were in tears.”

Ms Cook says Tui passengers were escorted back through the terminal, where no airline staff appeared to explain the problem.

Instead, they received emails from Tui, citing “operational issues” for the cancellation.

“People started to get emails to say the flight had been moved to the next day,” says Ms Cook. “My email only arrived arrived when I was in the taxi on the way home later that day. “

As they live locally, the Cook family went home and the next morning returned to Manchester Airport for the rescheduled 1.15pm departure. But there were yet more delays, with passengers waiting into mid afternoon to board the plane.

“Eventually we got a gate number and went to wait. The wait continued and eventually we boarded,” says Ms Cook.

Around 3pm, “the bags arrived and the next we heard was the pilot apologising for the past 30 hours. He explained that they were doing everything they could to get the flight out.”

The pilot told passengers there could be another 40 minute wait due to the baggage loading issues.

“He said, ‘my copilot Simon is even loading bags’ – so we looked our the window and there he was.”

Swissport is in charge of baggage handling for Tui flights from Manchester Airport.

“The next we knew we were taxiing to the runway, we were all cheering. I decided to tweet as this guy had gone above and beyond,” says Ms Cook.

She thinks Tui should recognise the pilot for his help with getting the flight on its way.

“We were all taken aback by what he had done,” she adds. “Thirty-two hours delayed and it could have been much longer if it weren’t for Simon.”

The Independent has contacted Tui, Manchester Airports Group and Swissport for comment. Rail strikes: what does it imply in your journey?