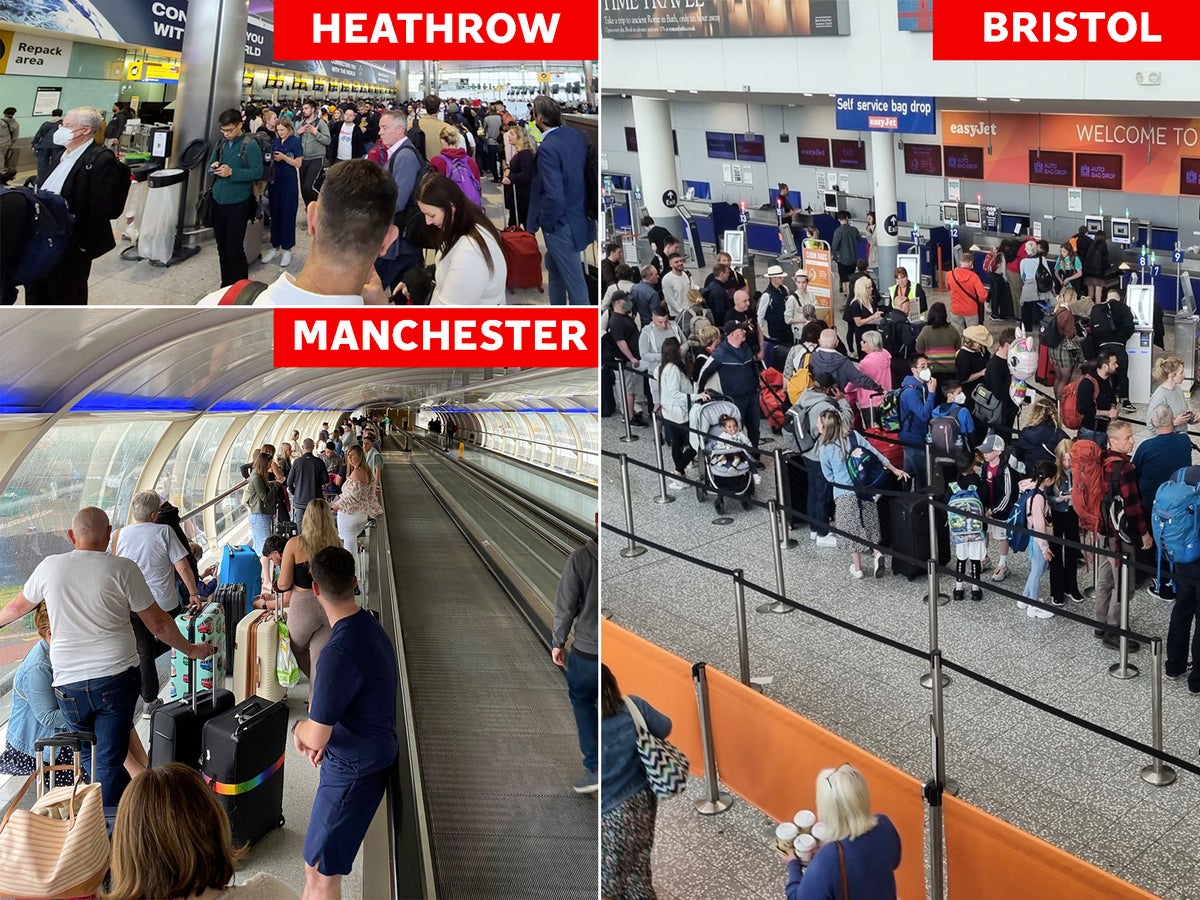 Britons face more cancelled flights and holiday chaos this week as millions embark on half-term getaways or trips to coincide with the platinum jubilee weekend.

EasyJet has axed another 30 flights at Gatwick on Tuesday, The Independent has been told, following British Airways and Tui in cutting schedules amid staff shortages that have caused major disruption.

Passengers reported four-hour queues at Manchester Airport on Monday, while at Bristol they were forced to wait outside in a long line which reached a car park. There were similar scenes at Heathrow and Birmingham.

The situation could worsen in the coming days with people jetting off once the four-day bank holiday period begins on Thursday. More than 10,000 flights are scheduled to depart between Thursday and Sunday, according to aviation data firm Cirium.

Meanwhile the RAC estimated that 19.5 million leisure trips by road will take place between Wednesday and Sunday, leading to fears of road chaos.

Rory Boland, editor of Which? Travel, said:”Airlines sold these tickets, took their customers’ money and then turned around at the very last-minute and said actually we don’t have the staff to run these flights. That’s not on.

“Looking ahead to the summer, airlines must make sure they are only selling tickets for routes they are confident they have the resources and capacity to run.”

British Airways is cancelling about 120 European flights daily to and from its main base, London Heathrow – but typically giving several weeks’ notice.

A senior Labour MP, Ben Bradshaw – a member of the Transport select committee – said the government’s “chaotic stop-start approach to travel during Covid” had exacerbated the problems.

He said: “We had the most restrictive travel regime for most of last year, but the government opened up travel all in one go with no warning which meant the industry had no time to prepare.

“Coupled to that, the public are now desperate to make the trips they cancelled or postponed during Covid. The government should have foreseen and planned for this.”

But a government spokesperson said: “The aviation industry is responsible for making sure they have enough staff to meet demand, and we have been clear that they must step up recruitment to make sure disruption is kept to a minimum.

“In addition, using our post-Brexit freedoms, we have changed the law to provide the sector with more flexibility when training new employees, which will help it to fill vacancies more quickly. We have also worked with Border Force to ensure preparations meet passenger demand.”

Venice, Biarritz and Marrakesh: just three of the destinations for flights cancelled on Tuesday by easyJet from its leading base, London Gatwick – adding to hundreds of cancellations made by easyJet in the past week.

The carrier is culling dozens of flights from its overstretched schedules over the main half-term week in a bid to reduce the incidence of very short-notice cancellations. The Independent has identified at least 30 departures on Tuesday, affecting an estimated 5,000 passengers – after a similar performance on Monday.

At dawn on Monday, hundreds of passengers to Seville and Rome who were already at Gatwick were told barely an hour before the scheduled departure time that their easyJet planes were grounded.

Alan Black tweeted: “At Gatwick. Just about to board flight to Seville for family wedding. Flight just cancelled. No alternative flights, in fact no support offered at all.”

Under European air passengers’ rights rules, an airline cancelling a flight must provide an alternative on the same day – on a rival airline if that is the only solution. Travellers are also due cash compensation unless “extraordinary circumstaces” were responsible.

The airline blamed air-traffic control problems on Sunday night for the cancellations. But a leading consumer advocate has accused easyJet and other carriers of “undermining confidence in taking a holiday”.

Paul Charles, chief executive of the travel consultancy The PC Agency, called on airlines and airports to promote careers in aviation.

“Without such a recruitment push showcasing the best of the sector, consumers are going to be facing queues and cancellations for many weeks to come.”

A spokesperson for easyJet said: “Due to the range of issues we continue to see impacting our daily operations, we have taken the decision to cancel some Gatwick flying in advance, to help provide reliable on the day services.

“This is a very small proportion of our flying, nevertheless we have not taken these decisions lightly and we have done so with the view to ensuring we can take as many customers as possible away on their holidays this summer.

“As the industry is currently facing some challenges we have already taken action to further strengthen our operation this summer, such as additional resourcing to process ID checks for new staff and operating some of our fleet with more efficient seating to provide further resilience in our operation.”

This is a reference to the removal of the last row of six seats from easyJet’s Airbus A319 aircraft, reducing the capacity to 150 which means each aircraft can be flown with three cabin crew rather than four.

Further easyJet cancellations on Tuesday include holiday flights to Preveza in western Greece, Rijeka in Croatia and Milan, plus links to seven European capitals: Amsterdam, Athens, Berlin, Budapest, Copenhagen, Madrid, Prague and Sofia. Other destinations include Valencia on Spain’s Mediterranean coast and Krakow in Poland.

The Independent has also identified some easyJet cancellations from Gatwick later in the week, including a round-trip to Krakow on Wednesday – with both return journeys to Prague grounded. 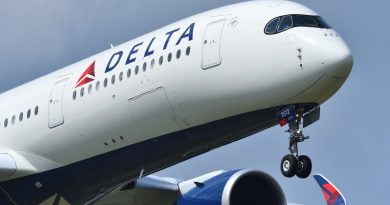 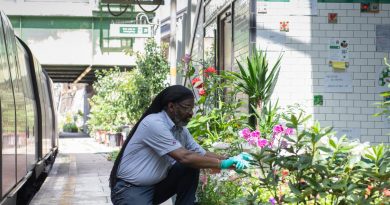